On Friday night, racism reared its ugly head once again. Eerily reminiscent of the dark days of the KKK, white nationalists and white supremacists wielded tiki torches – attempting to instill fear – as they marched through Charlottesville, Virginia. This was the face of pure evil. But, how should Christ-followers respond? 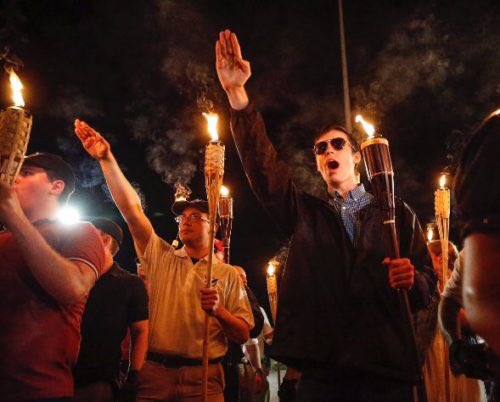 The Friday evening march and the Alt-Right rally taking place on Saturday came in response to Charlottesville’s decision to move a statue of Confederate Gen. Robert E. Lee from Emancipation Park to another park. As they marched, white nationalists and white supremacists shouted, “unite the right” and “we will not be replaced,” and called for the South to split from the United States.

Though the scene was appalling, visible racism is not new to our country. Millions of men and women lost their lives during the Middle Passage, slavery, Jim Crow, and fighting for Civil Rights in America. So, violence arising from racial tension is nothing new in our country. But, back then, people hid their racism under hoods and under cover of night. Now, it is bold and no longer hidden from public view. It is no longer hidden, partly because of the rhetoric emanating from the 2016 Presidential campaign.

David Duke, the former KKK grand wizard, was unambiguous about what Saturday’s alt-right and neo-Nazi rally in Charlottesville, Virginia, meant to him:

Ed Stetzer, Executive Director of the Billy Graham Center and publishes church leadership resources, was right when he said:

We must be willing to acknowledge that they (Alt-Right) have been emboldened by the rise of Donald Trump and the values and rhetoric surrounding his 2016 Presidential campaign. Although the President seems to teeter-totter between silence and condemnation, the table has been set. The truth is, it is clear that many in the alt-right movement feel as though a door has been opened for their supremacist worldview, and that “Make America Great Again” was about their warped definition of a great nation.

Yes.  Emboldened racial tension and hatred may stem from the rhetoric of the 2016 Presidential campaign, but the Bible says that it comes from a deeper place.

Hatred Comes from a Corrupt Nature

Racism is Sin and Irrational

Racism is irrational and illogical.

Racism is irrational and illogical. I am still trying to wrap my mind around why someone would hate another person because of skin color. Or how one race of people believes its race is inherently superior to another’s. White supremacy is evil. Racism is a sin, and it is irrational. When I read the Bible, there are at least four reasons racism is illogical. Racism is irrational because God created us in his image (Genesis 1:26-27), we all descended from the same man – Adam (Genesis 5:3-5; Acts 17:26), and it is impossible to love God and hate your brother/sister (1 John 4:20), and it ignores that God’s family in heaven will include people of all ethnic groups (Revelation 7:9).

How Christians Should Respond

How should Christ-followers respond to what happened in Charlottesville on Friday and Saturday? Here are a few ways we can respond.

Our first response to racial evil and violence is turning to and crying out to God. As I attempted to recover from the disturbing scenes from Friday night, I recognized that this burden is heavier than any of us can carry. The racial evil in our world sickens me, troubles me, saddens me, and makes me feel helpless. It causes me to cry out to God like Habakkuk:

How long, O Lord, must I call for help? But you do not listen! “Violence is everywhere!” I cry, but you do not come to save. Must I forever see these evil deeds? Why must I watch all this misery? Wherever I look, I see destruction and violence. I am surrounded by people who love to argue and fight. The law has become paralyzed, and there is no justice in the courts. The wicked far outnumber the righteous, so that justice has become perverted. Habakkuk 1:2-4

Our first response should be to fall on our face before a holy, righteous, and all-powerful God – individually and collectively. Only God can bring healing to our broken world.

We silence the voice of racial hatred with the louder voice of redemptive love.

We silence the voice of racial hatred with the louder voice of redemptive love. Our love must be more robust than their hate.

The Bible says that God hates (strongly dislikes) evil and wickedness (Psalm 5:4; Proverbs 6:16-19), of which white supremacy is one manifestation of this wickedness. For anyone who consistently practices evil actions that cause friction in the community of humanity, including racism, God renders an explicit moral judgment against them. Because God has an intense dislike for these evils, we should imitate God and hate sin and wickedness (Psalm 97:10; Proverbs 8:13; Romans 12:9). Rather than winking at evil or ignoring it around us, we should ask God for the capacity to hate the things he hates. The more we hate sin, the more we want His kingdom to come and his will to be done on earth as it is in heaven.

We should publicly denounce all racism and white supremacy in our country. All people, especially Christ-followers, should speak out openly against and repudiate white nationalism and supremacy. Any claim that one group is superior to another is racism, pure and simple. It diametrically opposes the gospel of Jesus. Moreover, it denies human dignity and freedom in this country for which many died.

White supremacy is wrong. It is a sin. And, we must stand against it and not be silent about it.

White supremacy is evil. It is a sin. And, we must stand against it and not be quiet about it. It is not O.K. What we saw on Friday and Saturday is not what true image-bearers say and do. Therefore, we must use strong and clear language to express our repudiation of this evil. Our words and actions – rejecting white supremacy – must not be seen as ambiguous and celebrated as benign.

Pastors – white and black – this is not a time for silence. The gospel demands that we vehemently reject white nationalism and white supremacy. For, “God sent his son – a brown Middle Eastern man – to save the whole world, including sinners of every race and ethnicity (John 3:16).” Biblical Christianity overcomes social, ethnic, and gender barriers. ” Any supremacy – racial, gender, ethnic – is spiritual bondage, and we need Jesus, the ultimate deliverer, to set us free (Galatians 3:26, 28).

It repudiates racism no matter where we find it. There is no place for white nationalism, white supremacy, and Neo-Nazis in America.

We cannot sit back and do nothing. We are responsible for confronting white supremacy when and where we see it. Our job is to:

Uproot the stubborn weeds of anger and fear.
Break the yoke of superiority and inferiority.
Smash the yoke of false assumptions.
Pulverize the yoke of incorrectly assumed hostility.
Demolish the yoke of misunderstood motives.
Dismantle the yoke of prejudicial judgment.

We must love one another. Our God, who is love (1 John 4:8), calls us to love each other, grieve, and stand with each other. Let’s not wait for more suffering to occur. Let’s come together now. The world will know that we belong to Jesus because we fight for the highest good for one another. Thus, our love for one another will heal the festering wounds in our world.

We are facing a turning point in the history of our country. Will we rise and speak and live the gospel’s truth, or will we remain silent and be as guilty as the white supremacists who are spewing their hateful rhetoric and inciting racial violence? So, I believe how we respond in the coming days will define us as the Church of Jesus and the human community. I pray we will choose the former instead of the latter.

What are some other ways Christians should respond to the racism in Charlottesville?