I assumed we lived in a post-racial society, you know where racism didn’t exist.  But, the hateful and racist reactions to a new Old Navy ad, which featured an interracial couple and their child, proves that we don’t. According to Scripture, not only are these racist reactions ugly and ignorant, they are absolutely irrational and illogical. 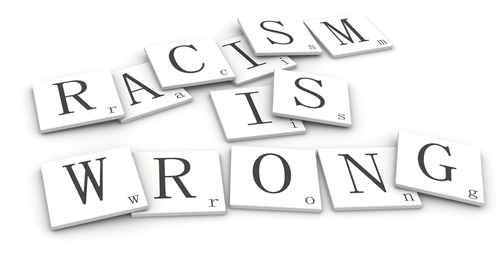 Why did I assume we lived in a post-racial society? Why did I think we were passed certain conversations about race? Maybe it was because we elected a Black man to be POTUS (President of the United States) almost eight years ago. Maybe it’s because I am the Lead Pastor at majority white church (we are becoming more and more diverse). Or maybe it was because I deluded myself into thinking we were.

Well, the venomous responses to the Old Navy ad, prove that we are far from a post-racial society. When the ad dropped, racists went to Twitter and spat unspeakable hatred. Their ignorance was unashamedly blatant. Their moronic and mindless comments infuriated me. How is this still an issue in 2016?  Are there still people in our world who espouse to this kind of racial hatred? I wish racism weren’t a reality, but the sad truth is, despite all of our progress, it is as real today as it was 60 years ago.

I am still trying to wrap my mind around why someone would hate another person because of skin color. Or, how one race of people believe its race is inherently superior to another’s. When I read the Bible, there are, at least, four reasons why racism is absolutely irrational.

Why Racism Is Irrational

In Genesis 1:26-27, it is clear that God created us in his image. To be created in the image of God means that humans share in, though imperfectly and finitely, God’s nature. This includes His communicable attributes (life, personality, truth, wisdom, love, holiness, justice). Therefore, we have the capacity for spiritual fellowship with Him.  Therefore, all people have value, worth, and purpose in the sight of God.

To assume a place of superiority over people or treat people as inferior or “less than,” is an affront the God who created them. When we treat people “less than,” our problem is not with the person, but with God.

When we treat people ‘less than,’ our problem is not with the person, but with God.

To treat the creature poorly is to treat the Creator poorly. Racism is irrational because God created us in his image.

Not only do we have the same heavenly Father, but according to Genesis 5:3-5 and Acts 17:26, we also descend from the same earthly father – Adam. Therefore, we are brothers and sisters. You have Whites relatives, Asian relatives, Black relatives, Hispanic relatives, Jewish relatives, and every other ethnic group under the sun.

To hate someone from another ethnic group is essentially hating ourselves.

To hate someone from another ethnic group is essentially hating ourselves.

Love for an invisible God can only be concretely expressed by love for our visible brothers and sisters.

Love for an invisible God can only be concretely expressed by love for our visible brothers and sisters.

You see, it is difficult for us to prove we love God just by our actions alone toward him. This is the reason John gave a verifiable command – whoever loves God, must also love his brother. The antithesis is true; if you hate your brother or sister, we can conclude you don’t love God. Racism is irrational because it is impossible to love God and hate your brother.

When we read Revelation 7:9, we clearly see a multiethnic, multicultural, and multi-linguistic people. All kinds of ethnic groups will populate heaven. Thus, we will be together forever. Therefore, it behooves us to learn to value, honor, and love one another now. We should look at our time on earth as a dress rehearsal for what we will do and who we will be worship with for all eternity.

The World Does Not Define Us

As followers of Jesus, let’s not let the world dictate how we treat one another. When we realize God created all of us in his image, we come from the same human being – Adam, can only express our love for God by loving our brothers and sisters and will be together for all eternity, then we will deconstruct the lies of racism and construct the mosaic of the kingdom of God.

What other biblical reason would you give to prove that racism is irrational?

What can we do to continue to deconstruct the walls of racism and construct superstructures of love and unity?