I can’t believe Momma has been gone nine months. This Mother’s Day will be another FIRST for our family. You know, the first birthday, the first Thanksgiving, the first Christmas, the first Memorial Day, that my mother is not with us. It is still unreal and surreal. To remember my mother this Mother’s Day, I decided to write her a letter. 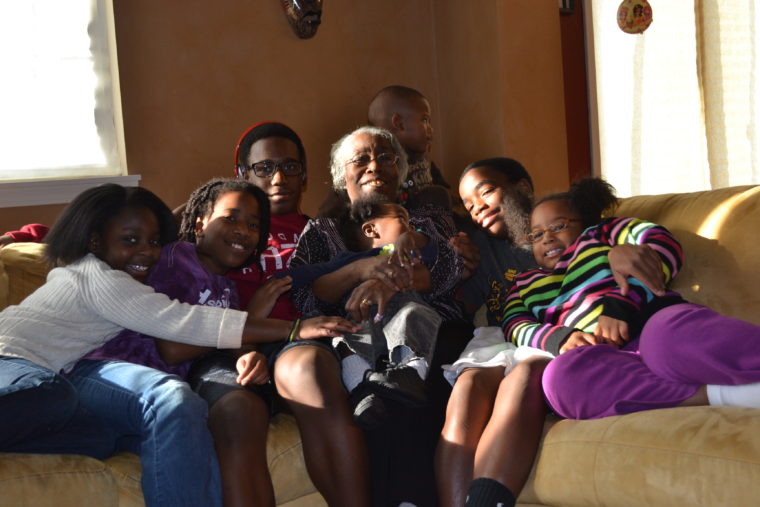 Hey, momma! How are you? What are you doing? What am I doing? Talking to you. I know I’m silly. Wow, I can’t believe it’s been a while since we talked last. I think of you often. The kids’ birthdays, holidays that have come and gone, sweet potato candied yams, pound cakes, and yes, little smokies trigger memories of you. Some days I cry, some days I smile, and other days I laugh out loud. Micah actually says LOL! LOL! Silly boy.

Speaking of your grandchildren, you would be proud.

Marvin Jr. is working and finishing his second semester of college at Lansing Community College. He’s not really certain what he’ll do once he graduates next year. We’re praying that it will become clearer – for his sake and ours. Can’t let him get too comfortable because then he’ll think he can stay with us forever. He does act like an old soul. Tonia and I have threatened to get him a rocker and an afghan. He just flashes that million dollar smile and keeps taking midday naps.

Hey, this weekend he had a big Bible study, where he answers difficult questions about God, the Bible, and Jesus (I know you would say, people just need to believe in Jesus). We had 56 kids in our house on a Saturday night, talking about God and the Bible. Momma, I know you wondering where we put all of those kids. The Lord made a way. You would have been proud of him.

He’s doing better saving his money. No, he doesn’t have a girlfriend yet.  Everybody in the family is trying to set him up. I told him to take his time, and God will give him someone who is just right for him. All in all, you would be proud of how mature and responsible he is. When I look at him, he reminds me of you. Thank you for investing, encouraging and loving him.

Micah is Micah. He genuinely missed your birthday card last year. And, it was not because of the money (Now, he missed that, too, but not as much as he missed you). He missed hearing from you. I know you didn’t like wrestling, but momma, you would have been so proud of Micah this year. He had a great season. He won 29 matches and lost 11. This is a good record, especially when you consider he lost 21 matches as a freshman. He has GRIT, just like you. To prove to himself that he has GRIT, in July, he will be going to a wrestling camp for a month, where they will work out four times a day. I know what you’re thinking: “Boy, it don’t take all that.”

A few weeks ago, all in the same week, he had four wisdom teeth pulled, they put his foot in a boot because he fractured his foot (that’s another conversation), and he was treated for tendinitis in his elbow. I can hear your worry voice in my head. I knew I should not have said anything. He’s fine. His gums have healed, he gets the boot off this week, and his elbow just needed some ice and rest. I know your solution would have been a little more drastic – get somewhere and sit down. Well, you know that is not going to happen with him.

Momma, I wish you could have seen Micah when he went to the prom. He was so handsome and his date was beautiful. If cancer had not taken your life, I am sure the fact that he spent his own money for dinner, would have. I think they had a great time, from beginning to end.

Hey, guess what, Micah will be speaking at Crosswalk (This is the youth ministry at Trinity) on June 5. Yeah, I couldn’t believe it either.  He is going to be talking about God as our peace. You would be proud of the young man he is and the young man he’s becoming. Thank you for believing in him.

Mikayla is growing into a wonderful young lady. Momma, I can’t believe she turned fourteen years old today. We got her a lot of gifts to celebrate her. She wanted a dog, and I was considering it, but Micah is allergic. So, we decided not to. Momma, the biggest thing is, her body is changing and filling out and all that stuff. You know I’m not a gun person, but I certainly understand why fathers buy them.

Mikayla got all A’s last year and she is on target to achieve the same thing. She reads everything and she really loved her human anatomy class. Tonia and I have been quietly urging her to think about pursuing a career in medicine. She hates it when we bring it up. We think she could do it, but I won’t tell her that I told you.

She is running track right now. She’s pretty good, but I think she does it to be with her friends more than because she really loves it. That’s not a bad thing, but when it is 40 degrees and her race is almost the last event, then you need to be in love with that sport. Also, that’s when we wish she had chosen an indoor sport. Of course, despite the cold, we are the loudest ones in the stands. We’re Williamses. Though you are not here, your unrelenting spirit lives in her.

Tonia is the best wife and mother anyone could ask for (I know I’m not supposed to a sentence with a preposition). She loves like you loved, sacrifices like you sacrificed and gives like you gave. As a couple, we are doing well. Man, momma, Tonia and I would have been married 22 years on July 10. I think we’ll keep going to see if we can make it to 50.

Man, I miss you so much. I thought we had more time. You were supposed to live to see your grandchildren finish college, get married and have children. This was the plan. This was always the plan. I know plans change, and apparently because God is sovereign and it is his world, he gets to do what seems best to him. It’s difficult, but I’m stepping into the grief and letting God heal my heart.

I could talk to you all day, but I have to go now. I just wrote this note to wish you a Happy Mother’s Day and to let you know I love you.

I’m so glad we had this time together (A little Carol Burnett doesn’t hurt anybody, right?).