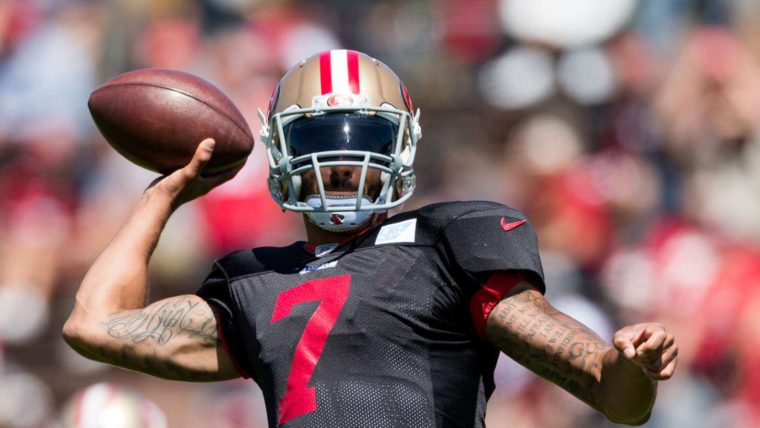 Why is Kaepernick Sitting?

Kaepernick is refusing to stand during as a sign of protest. What is he protesting? When reporters asked him to explain his decision, Kaepernick responded:

I am not going to stand up to show pride in a flag for a country that oppresses black people and people of color.

As you can imagine, people have offered various responses. Some are supportive of Kaepernick’s stand (I should say his sit) and others are vehemently opposed his decision, saying that it is unpatriotic.

Kaepernick and The First Amendment

Let’s deal with first things first. Colin Kaepernick has a right to express his opinions without the fear of censorship or restraint. Expressing his views is protected by the First Amendment of the Constitution of the United States. He has a right to his opinions. The corollary is true as well. People who agree or disagree with him have the right to express their views without censorship or restraint. Constitutionally, he is within his rights to sit or stand during the singing or playing of the national anthem. And, others are within their constitutional rights to disagree and criticize his refusal to stand. He is exercising his first amendment right the right way – nonviolently. We may not agree with the way he is going about expressing his views, but we should fight for him to be able to express his views.

Kaepernick is Not Doing Anything New

So, Colin Kaepernick follows in a long line of sports figures who have made a public statement, protesting the national anthem. Others have done it in the past, and I am certain others will protest in the future.

To Form A More Perfect Union

Our country is not perfect, but we continue to fight to form “a more perfect union.” We continue to combat racism, sexism, nationalistic arrogance, poverty, consumerism and all kinds of greed. We have problems in this country. Stevie Wonder can see that.

I love what ESPN commentator, Stan Verrett, said: Let’s pay as much attention to the substance (of the flag) as we do to the symbol (of the flag). In essence, Verrett is saying if you honor the flag with your lips while dishonoring with your actions, you are being a hypocrite and not living up to the ideals of which it represents. Quoting Isaiah, Jesus told the Pharisees something similar regarding worship, something infinitely more important than the national anthem:

You hypocrites! Isaiah was right when he prophesied about you, for he wrote, ‘These people honor me with their lips, but their hearts are far from me. Their worship is a farce, for they teach man-made ideas as commands from God.’” Matthew 15:7-9

Just like the cross, reading the Bible and attending church, the national anthem at sporting events has become an empty ritual. We transform symbols into substance by living the principles and ideals of the symbol.

Whereas I appreciate Kaepernick’s motivation – to raise awareness to some injustices in our country, I offer my limited advice:

What is your take on the Colin Kaepernick controversy?