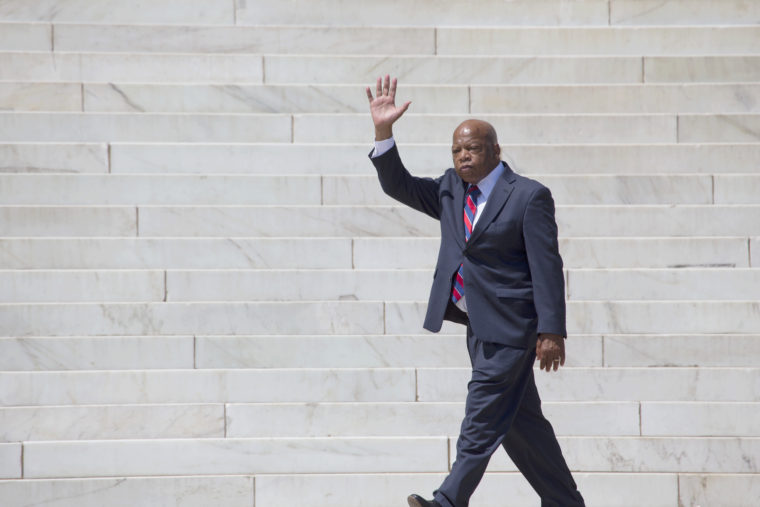 In an interview with the political analyst, Chuck Todd, John Lewis said he did not consider Donald Trump’s presidency legitimate. He didn’t consider it valid because the Russians interfered with our democracy, mainly by releasing emails that would cause voters to question Hilary Clinton’s character. Russia didn’t have to highlight her lack of integrity. Clinton did that all on her own. I digress. Moreover, John Lewis said he would not attend the inauguration.

I respect John Lewis. He is an American icon and a Civil Rights hero. However, I don’t agree with Lewis’ assessment. In fact, John Lewis’ statement is disrespectful to the office of the President and it does not contribute to the peaceful transfer of power. That Mr. Lewis is choosing not to attend the Inauguration is his prerogative, but his absence does not foster bipartisanship. I wish he would reconsider.

Though Trump lost the popular vote, the electoral college has spoken. Whether we like it or not or agree with it, Donald Trump is the President of the United States of America. Period. We should honor that. So, I humbly disagree with John Lewis statement against Mr. Trump. This post is more about how Mr. Trump could have responded.

Three Ways Donald Trump Could Have Responded to Criticism

When Donald Trump saw what John Lewis said, he had three plausible ways he could have responded.

Congressman John Lewis should spend more time on fixing and helping his district, which is in horrible shape and falling apart (not to mention crime infested) rather than falsely complaining about the election results. All talk, talk, talk – no action or results. Sad!

His response is consistent with who he says he is and what he would do if someone attacked him. In his 2007 book, Think Big and Kick Ass, Trump wrote:

When someone intentionally harms you or your reputation, how do you react? I strike back, doing the same thing to them only ten times worse.

This is exactly what Trump is doing to Lewis – striking back only ten times harder. Now, I understand the human heart. If someone hurts you, it is human nature to strike back and get revenge. I have gone tit for tat and eye for an eye more times than I care to admit. I was wrong. What does the Bible say about how we should handle criticism? What can we learn from Lewis and Trump’s missteps?

The Bible and Handling Criticism

When we are criticized, do we go tit for tat and eye for an eye? Do we strike back ten times worse? Is this how Jesus tells us to respond? How does the Bible tell us to react to criticism?

You cannot stop people’s tongues,” he said, “and therefore the best thing to do is to stop your own ears and never mind what is spoken. There is a world of idle chitchat abroad, and he who takes note of it will have enough to do (Lectures To My Students, p. 321).

Solomon, the wisest man that ever lived, said these powerful words in Proverbs 15:1:

Solomon is saying the anger of the first speaker can be set aside or calmed by the gentle response of the second speaker. Therefore, it is a response without anger or harshness. The German Common Language Version translates this verse: “A reconciling answer cools down anger, but a hurtful word heats it up.” Responding with gentle words anticipate the gentleness of Jesus (Matthew 11:29) and one of the attributes of a believer who is filled with the Spirit (Galatians 5:22-23). Therefore, being reconciling in heated situations requires forethought, patience, self-controlled, and kindness.

Then the other administrators and high officers began searching for some fault in the way Daniel was handling government affairs, but they couldn’t find anything to criticize or condemn. He was faithful, always responsible, and completely trustworthy. Daniel 6:4

We all have blind spots and need people to correct us. Therefore, when someone criticize us, we should ask: Is what the person is saying about us true? If it’s true, then I need to receive the kick in the butt as a gift. Proverbs 10:17 says we should not ignore correction but receive it because it leads to life.

Ultimately, when you know WHO you are and WHOSE you are, you don’t have to react to every criticism that comes your way. Wise people respond wisely to criticism. We would do well to listen to Dale Carnegie:

Any fool can criticize, condemn, and complain, but it takes character and self-control to be understanding and forgiving.

What are some other ways we can respond to criticism?