We tend to be more sympathetic and willing to help people who are innocent victims, people who have fallen into trouble through no fault of their own. What about the stupid people? Do stupid people deserve our compassion and help? Most of us would be less sympathetic and not willing to help. “They made their bed; let them lie in it.” But, Jesus tells a surprising story to help us understand how the way we think about and treat stupid people might be all wrong. 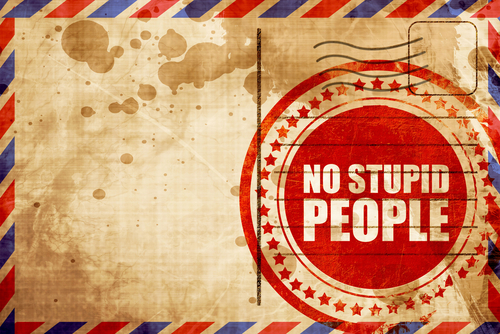 I think at some point in our lives we have all heard the story of the Good Samaritan (Luke 10). Here is a summary of the story. A Jewish man is traveling from Jerusalem to Jericho. He falls among thieves. A priest comes by and a Levite comes by (both men should have helped him), but they pass on the other side. A Samaritan comes along and stops and helps the man. This is significant because Jews and Samaritans don’t get along. The Samaritan is the one you would least expect to help the man.

The Samaritan puts oil on his wounds, binds him, puts him on his donkey and takes him to a hotel. He tells the innkeeper that he will pay any additional expenses for the man on his way back. Before Jesus tells the parable, he asks who is my neighbor, that is, who qualifies as worthy of neighborly acts. Hence, Jesus tells the story about the man who fell among thieves and needed a neighbor. Jesus tells this story so that it is not just an innocent victim, but a stupid person – one who makes poor choices and careless mistakes – who needs a neighbor.

Why do I call this man stupid? Well, a very important point of this story is that you would not travel the road to Jericho alone; you would travel in groups because this road was notoriously dangerous. It was packed with bandits who were looking for people stupid enough to travel alone, with merchandise. Everybody knew he should not have been traveling on THIS road, alone, with anything worth stealing. He was stupid.

Not only was he stupid, he was really stupid. Jesus said he was robbed and beat up. Robbers around the world seem to have a general ethic they follow. If you give them what they want, they usually don’t beat you up and leave you half dead. Now, I know it happens. But, it is more rare than common. Now, if you resist, they will, more than likely, beat up a person and maybe even attempt to kill him. So, we have a man traveling on a very dangerous road, alone, with merchandise, and when they tried to rob him, he probably resisted. He was not just stupid, he was really stupid!

I think one of the purposes of the parable is to show God’s values. Even if a person is in trouble because of their own stupidity, they are still worthy of our neighborliness.

Even if a person is in trouble because of their own stupidity, they are still worthy of our neighborliness.

We tend to be more willing to help those who are innocent victims. It is much harder to help someone and have compassion on someone who got in trouble because of an addiction, a weakness, and hanging around the wrong people. People are people.

The bottom line for Jesus’ followers is to help human beings, even really stupid human beings. We are tempted to help some people, but not the ones who have made really poor choices. Yes, we should create boundaries and not become enablers for people who are chronically abusive and who are not trying to fight their addictions. Even with boundaries in place, we must not allow these boundaries to prevent us from having compassion on people who are really stupid. This is a very difficult parable to live, but not an impossible one.

So, are there some really stupid people from which we have been withholding neighborliness and charity and compassion? Even if they got in trouble because of their own stupidity, in Jesus’ eyes, they are still worthy of our sacrificial and unconditional compassion.

Sometimes, we are just as stupid as the man in the story. I am glad Jesus doesn’t pass by on the other side but he extends his unconditional love and compassion to us.

Is Jesus calling you to help a “stupid” person today?